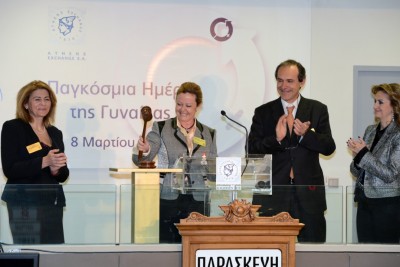 A very exceptional event was held on 8th March 2013 at the Athens Exchange on the occasion of the International Women's Day. Mrs Terina Kalogeropoulos Armenakis, Honorary Consul General of Ethiopia and President of the Consular Corps in Greece honored the event by proclaiming the commencement of the trading session.

Mrs Terina Kalogeropoulos Armenakis, was the 1st certified stock broker in Greece in 1985 to set up an investment brokerage office with Citibank in Athens. Mrs Kalogeropoulos Armenakis, on her brief speech highlighted the importance of the Athens Exchange to act as a tool for development and growth to the National Economy due to the recession of recent years (Attached the entire speech of Ms Armenakis).

Mr. Socrates Lazaridis, President of the Athens Exchange S.A., on his speech, referred to the importance of women in the development of the Capital market and Entrepreneurial community of our Country, as well as the role they have in making our economy more competitive, more extrovert and more friendly towards investments.He also noted that the presence of a large number of representatives of the Diplomatic Corps at the event reinforces the idea that in our country there are a lot of investment opportunities that must be identified in an appropriate manner.

http://youtu.be/YQ1oPv6AOR4 Interview at the SBC Channel